By July 1st, 2023, Tucson’s population will rise to 549,122, based on our research. Since the US Census Bureau typically releases estimated population data for the same time period, we use the first of July every year. Based on an average growth rate of 0.29% over a period of 11 years, the calculation was made. We think that using figures from recent years will improve the estimation’s accuracy (see the table in the section below).

Looking back at the last eleven years of Tucson’s population, the growth rate is slow, ranging from -0.79% to 0.84%, adding around -4,341 to 4,538 people each year to the overall population. Overall, the population of Tucson has grown at a steady rate between 2011 and 2022, with some fluctuations in growth rate. The population has grown by approximately 2% over the entire period. 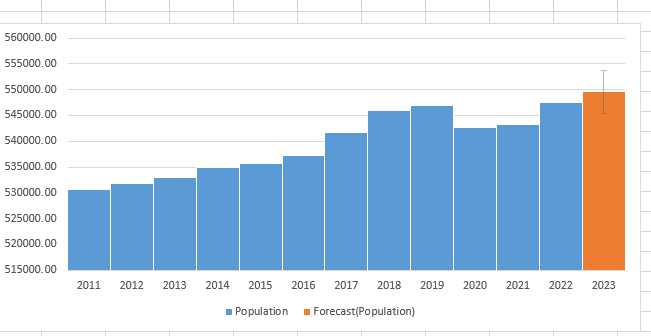 With more than 38% of the population identifying as Hispanic or Latino, Tucson has a sizeable Hispanic population. The proximity of the city to the Mexican border and its past as a part of Spanish and Mexican territories account for a large portion of this. The Tohono O’odham Nation and the Pascua Yaqui Tribe have reservations close to the city, adding to the city’s large Native American population.

Tucson has a mix of high-income and low-income neighbourhoods in terms of socioeconomic status. In 2019, the city’s median household income was $52,295. The Catalina Foothills and the central business district are two areas of the city with higher median incomes, while some neighbourhoods in the south and west of the city have lower median incomes.

In general, Tucson is a multicultural city with a variety of racial, ethnic, and socioeconomic backgrounds. Both the city’s delicious and distinctive culinary offerings as well as its thriving arts and culture scene exhibit this diversity.

The following links provide data for this topic: